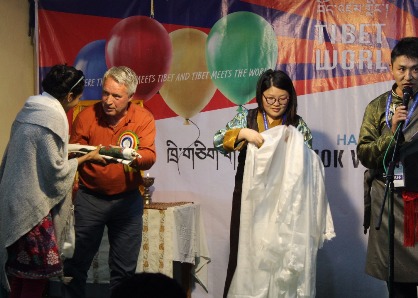 The event was also attended by few members of parliament, head of NGOs and many other important guests and students and volunteers. At initial time hall was full and many students couldn’t find seat. After everyone settled, Event was hosted by Tenzin Choegyal (English teacher) and Lhamo Tsering (education officer).the event was proudly opened by singing Tibetan national anthem followed by butter lamp lightning and cake cutting by chief guest and the special guest. Everyone enjoyed cake and tea. Mean while Geshe Lhakdor lak has given the award to our staff and volunteers. After that our longest volunteer Mr. Greg Robin has shared his story and experienced that he had in Tibet world for 6 month by teaching English, every year since Tibet world started.

Award was given to him for his sincere and showing his compassion in action. After the speech, guests were entrained by students dance and the songs performances. These great performances were followed by Tibet world success story presentation by two hosts. This presentation reprints the 10k voices of who benefits from Tibet world.

Then the award was given to Tibet world’s supporters, board members and special volunteers by Mr. Welfred Peffer.,Followed by Directors story and his struggles for Tibet world. It was indeed a great thought and hardship he went through which gave a light to Tibet world and opened a door of opportunity for many people. The program was light up again at the end by chief guest and special guest speeches. Both the guest appreciated our director for his courage and hard work put for the humanity and for others. This event was concluded by singing I have Voice song by staff and students and balloons filled with helium gas was distributed among guest and thanked the guest for coming and support 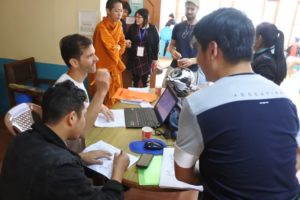 On 20th Oct, 2018 ( Saturday ) we organized a game called treasure hunt, which is common in western world and quite new in Tibetan society. This idea was given an organized by few of our dedicated volunteers and we are really excited to organize. Many people registered and they made a group of their own in 3-4 members and given a name for their group. Almost 30 people joined and game was enjoyed thoroughly. We have also prepared prize for the winners. All the people enjoyed the game and they thanked Tibet world for organizing an interesting games.

On 21st Oct, 2018(Sunday ) The staffs, students and volunteer of Tibet World hiked to triune and stayed

overnight there. Which was amazing and great experience for all of us and we enjoyed at fullest. The nature and weather and will of all the students and volunteers are incredible. It was a bit relief for all the staff, volunteers and the students after the many events organized this month. We start at 8 from Tibet world and after walking for 4 hours we reach to our destination. Everyone was so hungry, so we first put all lunch in middle and shared lunch each others. Environment was filled with excitements and fragrances of food and energetic. After the lunch we decided the place to stay at night and everyone went to their place to settle and took a little rest. After sometime everyone gathered and few went to collect wood and few were ready to make a fire for night and the dinner. Everyone enjoyed their own path of doing something. Then around 7 we start cooking and meanwhile people were enjoying the warm fire and listened songs and enjoyed the views. Then we had dinner (thukpa) very delicious. After the dinner people dance, singing near the fire. Then the next morning after having breakfast, some of people like to go to hike to the next mountain and some are tried and want to relax. So they carried on their way to the new destination and others are taking rest and making lunch at the same time. At 1 o clock we start our journey back to Tibet world. This hike was a great experience for all of us and all of us enjoyed to the fullest. For few people it is also a new place and experience.

I have a voice conference 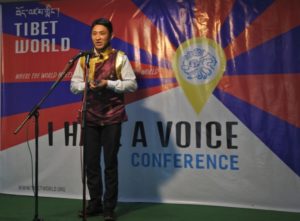 “I have a Voice Campaign” was officially inaugurated by Chief Guest, Tibetan parliament member Lobsang Dakpa. He found himself absolutely content to be connected with Tibet World and its bright purpose for the world and Tibetans. Being college batch mates with our director Yeshi Lhundup he shared how both of them had decided to serve the society in the best ways possible and were young activists, he also mentioned how he doubted Yeshi’s big dreams and idea of Tibet World reaching great heights but Yeshi’s unbeatable devotion and his compassion in action had proved him wrong and certainly encouraged many more like him in the society to have courage in making the desired change for the world peace. Tibet World is working on a bigger scale because it is working for not just the betterment of the Tibetans but for the best of the world.
Director Yeshi Lhundup addressed the audience about the purpose of Tibet World and the obstacles that the organization had to pass in order to reach where it is now. His inspiring story made us believe that nothing is impossible and you can conquer the toughest of the difficulties in life just by the overwhelming compassion 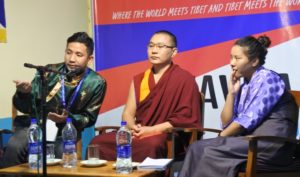 While our students and teacher shared their stories on the second day of our campaign, during the group discussion, when asked by the audience as to how do it feel about not being able to return to their own land, their heartfelt expressions made our hearts race. They wish to see their motherland, an urge to feel the winds flowing in Tibet and feel if the soil there is different from India’s. While they expressed they also mentioned by constant hard work of HH Dalai Lama and his promises, they have an unshakeable hope that the day is not far when they will be back to their motherland.

On October 4th 2018 (My escape from Tibet Founder  story)

A story telling session- “My Escape from Tibet” by Yeshi Lhundup
With only 13 years old Yeshi Lhundup decided to cross the Himalayas looking for freedom, following his brother’s will to reunite with H.H. Dalaí Lama. Facing a journey of many challenges with nothing but a backpack full of uncertainties, he arrived to Dharamsala to give hope and voice to those who had been struggling like him, the lack of communication, family and opportunities. Today Tibet World is the place where, as he says, “the world meets Tibet and Tibet meets the world” 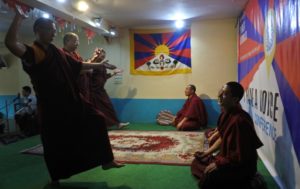 Tibetan demonstration of Buddhist debate. It was discovered by a Tibetan Master Shakpa Choekyi Gyaltsen in 12 century. The purpose of Debate is studying thoroughly and to learn the deepest level of knowledge Buddhism philosopher. H. H the 14th Dalia Lama said that we can this method of study can use in other academy fields 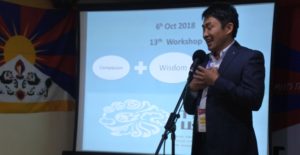 A grand cultural show was organized in support of the campaign. The show was absolutely magnificent as we saw people engaging themselves to the fullest in order to understand the Tibetan Culture. Towards the end of the cultural presentation all of us learnt the Tibet cultural dance and danced together. The audience was amazed by all the new information and surely took some good memories home!