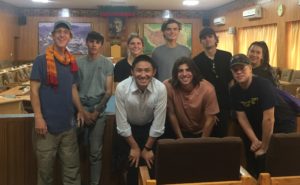 International youth organization had taken ten students from different university and visited Dharamsala. The group was introduced with different Tibetan organizations at Dharamsala and created more awareness about Tibet and Tibetan culture. On 15th of may 2019, they had visited the TCV and Central Tibetan Women association (TWA) and got to know the stories of TCV and TWA, also the current political situation of Tibet.

A Trip to Gyutoe Monastery and to Norbulinga Institute-They were first taken to the Monastery and  toured the main temple and the library of the monastery.. They liked the library where some of them found some interesting Buddhist books and scriptures. Next they went to Norbulinga institute where they had a good time. A  guide was hired who led us to various workshops in the institute, such as the woodworking, metalwork, thankga painting. They also got to see the doll museum where dolls were made in likeness to various occupation of Tibetan and some from our History. This was followed by visit to the monastery and then went to Norbulinga shop. They seemed to enjoy much during the tour of the workshops. They seemed little tired but overall they had a good time.

Collaboration with Gap force group (6 May 2019) 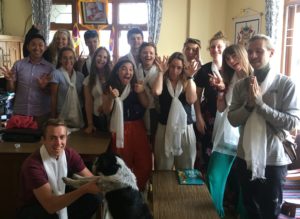 A group of 13 people came from America for the cultural exchange program. They were taken for tour around many organizations at Mcleodganj. The students from America were taken a tour to Central Tibetan Administration and they were amazed by how systematically our Tibetan refugee government functions. They were also taken to Tibet Museum and took deep interest in learning about the political situation of Tibet. The students also took active participation in Tibet Worlds monk chat class and they all enjoyed and exchanged the culture mutually. The student group also filmed the language classes and made an amazing documentary. The whole exchange program went smoothly and was really a meaningful one. 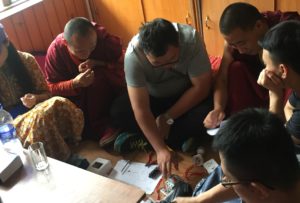 A professional electrician from Taiwan has given workshop on the basic mechanism of the electricity. He is very enthusiastic and he brought all the electrical appliances to each the participants. The duration of the workshop was for 2 hours. The workshop was more of practical explanation rather than theoretical and that’s why all the participants remained interested and engaged till the end. It can be claimed easily that things that are taught to participants will definitely be use in their daily life.

A group of 14 people came to Tibet world and attended our weekly cultural folk show. There were around 10 performances in the folkshow of the Tibet World. They were very enthusiastic until the last performances and also took part in the Tibetan cultural dance performances on stage. At the end, the Director also taught them his native dance which we call as “Dho”. After the folk show they personally came and thanked the Director and appreciated for hosting such an amazing event which aims to preserve the precious culture of Tibet.

Volunteer meeting and Dinner together (20th May. 2019) 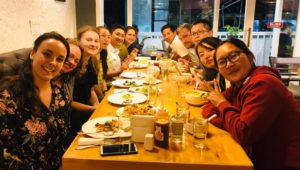 We had a volunteer meeting on 20th May  from 5pm to 6:30 pm, with all the volunteers. The meeting started with a brief orientation of Tibet World by Director Yeshi Lhundup. All the volunteers also introduced themselves. During the meeting many challenging issues faced in the Tibet World was discussed for better growth of Tibet World and possible solutions were discussed through the opinions of everyone. It was really a fruitful and meaningful meeting. After the meeting all the staffs along with the volunteers went for the dinner at one of the best restaurant of “Mcleodganj, Tibet Kitchen” 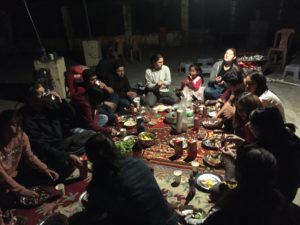 On 25th May Saturday all the staff members of the Tibet World along with the regular volunteers and few interns had a wonderful staff party. The party was organized at the roof top in the spring season which is the best weather of the year. Totally there were around twenty people. The party began by playing games such as UNO cards and some groups discussing philosophies. This was followed by cooking of the barbecue chicken and vegetarian barbecue for the vegetarian. The barbecue came out so delicious and yum that everyone appreciated it to the core. Then at the end most people drank a little juice, wine and beer. Over all, the party was a grand success and definitely a memorable one.

An introductory two day talk on Buddhism was given by Acharya Kunga Choedar to young minds of the Tibetan community. Acharya Kunga Choeder is a young learned monk from Sakya Monastery of Dehradun. The talk was mainly based on the “Four Nobel Truths”. There were around ten students who attended the two day teaching session. Students took keen interest in his teachings and they took active participation in the question and answer session. Students really enjoyed the teachings and it is obvious that it will bring a transformation in their mind and hopefully they pass on the wisdom to as many people as possible.