On the 1st of June a documentary movie called “Beyond Fear” was shown to people around Mcleodganj specially people from other countries. The documentary was organized by one of the college going volunteer, Lhamo Choedon. There were four people who attended the documentary program and the movie went for one hour. After the movie there was a question and answer session. Audience got moved by the story of the documentary. 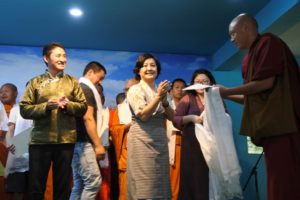 Tibet World conducted a valedictory ceremony on 14h June, 2019.  On completing the three months trimester course, exams were conducted for all the classes on 11th of June 2019. Tibet World’s passing mark is 60% and certificates were given to all students who scored above 60% with minimum 80% of attendance. The chief guest of the valedictory program was Mrs. Youdon Aukaktsang, Standing Committee Member of the Tibetan Parliament in Exile, CTA. The program was started with welcome speech from the Education secretary Tenzin Choegyal and Chinese teacher Sonam Khando. Then the Director of the Tibet World 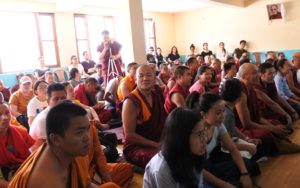 Mr. Yeshi Lhundup la gave a speech at the request of Education Secretary Tenzin Choegyal. This was followed by the certificate offering to students from the chief guest Mrs. Youdon Aukaktsang to all the students and to the volunteer teachers. A group photo was also taken after the offering of white scarfs. Mrs. Youdon Aukaktsang gave speech on importance of language and significance of humility while learning a language. After this tea and snacks were offered to all volunteers and students.  The students of Chinese language class collectively offered a certificate of appreciation to Chinese language teacher Mrs. Sonam Khando la. Thus the program came to the end and a group photo of students with all the teachers, volunteers and staffs were taken. 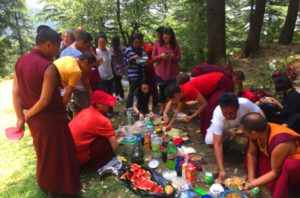 On 15th of June 2019 which is the best time of the year. We have decided to hike on an unexplored beautiful picnic spot which is between upper TCV and Mcleodganj. There were about 30 people consisting of staffs, students and volunteers of the Tibet World. The picnic started with playing cards, rackets, UNO games and so on. We prepared Indian masala tea which everyone liked. Students from different languages got along well among themselves and volunteers of all the language classes got to interact and mingle with each others. Everyone brought lunch and we all shared the lunch together. After lunch we divided ourselves into two groups and played many games till evening. It was so much fun. Fortunately the weather remained moderate and beautiful throughout the day. At the end of the day before returning back we all took group photo. Everyone enjoyed the picnic very well and it is needless to say that the picnic was a grand success. 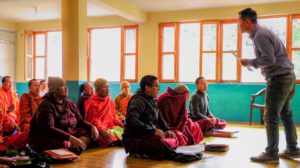 Tibet World is proud to announce that it is one of the best institutes to learn various languages such as Chinese, English, German and French. It is very clear from the statistics that every year there is increase in the number of the students. In the first trimester ( 4th of March to 14th of June  2019 ) we had 306 students who registered at Tibet World to learn various languages. Tibet world is excelling in giving systematic language course. Following are the reasons why Tibet world is best institute around Mcleodganj to learn the language.